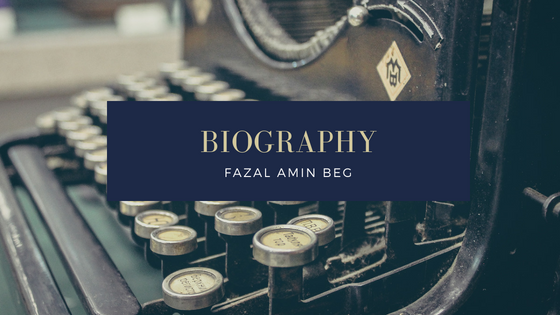 Born on 23 November, 1968 in his hometown in Gulmit within the Hunza Valley, Gilgit-Baltistan Region, Northern Pakistan, Fazal Amin Beg, son of Zafar Ullah Beg got his primary and secondary level education from the government school in Gulmit. Afterward, he left the mountain environment and reached Karachi for pursuing his further studies. Having done his higher secondary education in science subjects (pre-engineering) in 1988 and getting his Bachelor’s degree in Arts (B.A.) in 1992, Fazal Amin earned his Master’s degree in Persian language and literature in 1997 and his M. Phil degree in Central Asian Studies with a specialization in socio-cultural anthropology in 2005. Fazal Amin also qualified his PhD coursework in Asian Studies (specialization in anthropology) in 2011 from Quaid-i-Azam University, Islamabad. To date he could not complete his dissertation due to the lack of facilities for persons with disabilities, as well as an absence of financial support or scholarship in doctoral studies and the denial of regular employment within the public and NGO sectors, and civil society organizations that would allow him to effectively support himself and his family. Although, he has been striving for survival of the fittest and also overcoming his visual disability acquired as a blessing after qualifying his PhD coursework, nonetheless, he is re-energized and determined after couples of years to finish his doctoral study from abroad in an apolitical and enabling academic environment and get his degree with an honor and dignity.

Fazal Amin has also a great affection and aptitude for learning different languages. He is highly fluent in English, Urdu, Farsi and Wakhi (his mother-tongue).  He has also studied and achieved varying levels of proficiency in several other languages including German, French, Russian, Arabic, Uyghur, Burushaski, Pushto and Greek.

Professionally, Fazal Amin initially acquired experience in teaching and school management for over six years (in 1980s and 1990s) by serving the community schools. Although, at present, Fazal Amin has become visually unsighted due to a retinal degenerative progress called Retinitis Pigmentosa (RP) and confronts huge challenges in establishing his career, he works as an anthropological and development researcher, consultant and evaluator, occasionally attached with Aga Khan Rural Support Program (AKRSP) within Aga Khan Development Network (AKDN).  By using his digital voice recorder productively, Fazal Amin still continues carrying out his fieldwork with the help of his white cane and facilitated by a second person. It may sound interesting to researchers of social sciences and humanities that how could a visually disabled person like Fazal Amin conduct anthropological fieldwork successfully. He works efficiently on his laptop with the help of an effective talking software called Job Access with Speech (JAWS).  In addition to his diverse areas of interest and dozens of anthropological fieldwork projects  he has already completed in northern Pakistan, south-western China, northeastern Afghanistan and southeastern Tajikistan, Fazal Amin has also specialized in the preservation, documentation, and promotion  of the Wakhi-Pamiri language for over two decades in academic and applied domains. Within the realm of his linguistic efforts, he has written more than two thousand pages of Wakhi poems from over a hundred poets and collected over thirty thousand Wakhi words for a Wakhi dictionary. He has also collected and preserved the biographies of over a hundred persons of diverse backgrounds from Gilgit-Baltistan and Central Asia, in order to explore and get insights into the societal evolution and cultural change from the lens of those respective people. So far, he has come up with in-depth interviews and focus group discussions of over thousands of respondents recorded in audio-form.

In addition to his papers and articles published in academic and applied journals in Pakistan, Fazal Amin Beg has also contributed articles to a leading newspaper of Pakistan such as Daily Dawn, and others. Three of his papers, co-authored with other authors from Pakistan and abroad, are set to be published in 2018 in international academic journals on varying themes within anthropological and linguistic realms. In addition, he has written hundreds of pages of unpublished studies and reports that emerged as a result of his consultancies and independent initiatives.

Fazal Amin also has a deep passion for poetry as he personally ventured into the field for the first time in 1989 when he was on the crest of his youth. Besides composing some poems in Persian, Urdu and English, he mostly composes his poetry in Wakhi (his mother tongue). He now has now written over a thousand stanzas on various themes, expressing his feelings and understanding in metaphorical and literal contexts on different themes such as devotional, socio-cultural, lyrical, elegy, and homeland.

As part of his family and community traditions, Fazal Amin has been contributing productively towards community development in a voluntary capacity for over 30 years, independently as well as through his involvement in civil society organizations functioning in the region.  In fact, he is a founding member of some organizations. He is also highly vocal in advocating for human rights in various domains.

Fazal Amin has participated as a proactive participant and speaker in dozens of conferences, workshops and seminars within Pakistan and abroad. Internationally, in 2016 he conducted a seminar in Milan University, Italy, and presented research papers at Nante Institute in France and Copenhagen University in Denmark.  He has traveled in China, Afghanistan, Tajikistan, India, Germany, Italy, France and Denmark.

To sum up , despite the complexities of issues and hardship surrounding him monstrously as a handicapped person, Fazal Amin Beg’s  diverse competency   includes  his professional honesty and dedication; working as an anthropological and development researcher, consultant and evaluator; conducting different nature of qualitative fieldwork and  studies (academic and applied particularly in line with socio-cultural and applied traditions of anthropology); writing academic and journalistic articles/papers in English; generating/developing different kinds of reports  in a standardized English; expertise in documentation and writing of unwritten and endangered  languages  like Wakhi Pamiri and the surrounding languages in Anglicized orthography and IPA-based transcription system; well-versed in internet-based studies and content writing; effective in research and teaching, institutional/organizational management; working actively in team and independent capacity; possessing strong will  and decision-making power; having invigorated analytical power; blessed motivational skills in professional and social/voluntary fields in the civil society organizations; contributing  to the community development and societal changes as an educator in voluntary  and professional capacity; inclusive in his approach and sensitive to gender issues; background of over a dozen languages (local, regional and international from the West and East); talented in composition of poetry in Wakhi (his mother tongue), Persian, and also few in Urdu and English; expertise in working on laptop computers with high efficiency and with the help of a screen texts     reading software called JAWS (Job Access With Speech); command over the computer laptop using all fingers in typing and having an average of over 40 words per minute; ability of adaptability in the new environments; and so it goes on and on. Born on 23 November, 1968 in his hometown in Gulmit within the Hunza Valley, Gilgit-Baltistan Region, Northern Pakistan.

A Video Documentary on the Indigenous Knowledge Practitioner and the Hip Joint Adjustment Case of Maqsad Murad of Imit, Northern Pakistan